For anyone over the age of 40, having your phone on in meetings is regarded as a no-no. It’s perceived as rude and loutish and distracting behaviour.

But in recent years, as this blog has argued, there is a case for an active participation with Twitter to enrich the experience all round. And even to market the event.

A kind translation of this is the way we now consume Question Time (#bbcqt). Anyone watching Paddy Ashdown and Douglas Murray trading blows on television last Thursday would have been tempted to trade a few themselves.

The topic was Bin Laden’s execution or unlawful killing, whichever way you see it – a fundamental debate where it’s hard to sit on the fence.

Below, one of the nation’s top twitterati, @legalbizzle, takes Paddy’s side and lets off steam. It’s a good demonstration of how leaving your phone on and letting people push buttons can add a whole level of interaction to the topic. 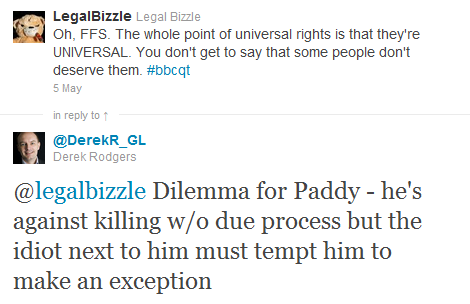 Beyond the question of should you leave your phone on, is what can you actually do with the tweet stream that happens?

More gadgety venues broadcast them up near the speaker, and sometimes incorporate tweets into the Q&A portion of their events. CubeSocial predicts that this will further evolve into teams which help panellists and speakers manage complex interaction between cyberspace and real life.