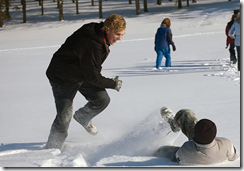 Watching my Twitter feed in February, I noticed a few tweets from CubeSocial founder Linda Cheung and came across a tweetup (a real world meet-up that occurs as a consequence of Twitter) that was being organised on the back of attendance at the LEX 2011 conference.

I couldn’t have envisioned the impact of the tweetup until I spoke with Linda a few weeks later. Linda wasn’t attending the LEX conference (like most start-ups, her company was working to a tight budget) but knew that Brian Inkster was attending. So they arranged an informal meeting on Twitter after day one of LEX.

Rightly using the hashtag for the conference (#LEX2011) in the tweets, the conversation was quickly picked up by others in Linda and Brian’s networks and, brilliantly, by other conference attendees.

I started to get a little excited about this – that will be the marketer in me….

Linda unintentionally ambushed the conference. She also got to meet the people she wanted without paying conference fees.

Well done Linda! Many a marketer would love to claim this fame.

Linda’s success got me thinking more about ambush marketing.

Using the official conference or event hashtag you could literally tweet yourself into affiliation. You could even run an unofficial parallel event.

One of my PhD colleagues was unintentionally affiliated with a conference. She commented on a Tweet with the official conference hashtag and was subsequently mentioned in blogs concerning the conference and gained new Twitter followers.

Twitter is allowing us to reach places, people and events where we would not normally have a huge impact. Linda’s ambush tweetup is a great tangible example of the opportunities Twitter can provide. So, can we really use Twitter as a new ambush marketing strategy?

I’ve yet to test but I would think success would be dependent on:

Have you willingly or unwillingly ambushed an event through Twitter?  It would be great to hear your stories.

This is a guest post by Jillian Ney. Jillian is a doctoral researcher and marketing tutor at the University of Strathclyde. Jillian’s research explores the use of social media in purchase decisions.