As a B2B company starting out on Twitter, one of the things that’ll likely come up in planning meetings is the legal disclaimer that typically accompanies any written output. It’s an understandable question, so as financial, legal and other professional services are now stepping out on Twitter, it’s worth having a look at what the early adopters are doing.

(You may question whether a disclaimer is necessary at all, but we’ll leave that debate aside for the moment).

Disclaimer on the Page Background

Morgan Stanley’s corporate account has a disclaimer on the background of their Twitter page. This has the upside of being able to display more than the 160 character limit of a Twitter bio, but the downside that it’s not visible to anyone accessing Twitter through a mobile client or app like Tweetdeck or CubeSocial. 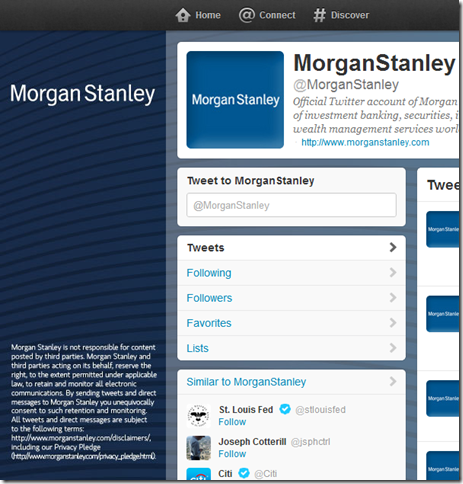 Pfizer have a similar approach but don’t provide a disclaimer as such, instead using the Twitter background to provide important links – including how to report adverse events. 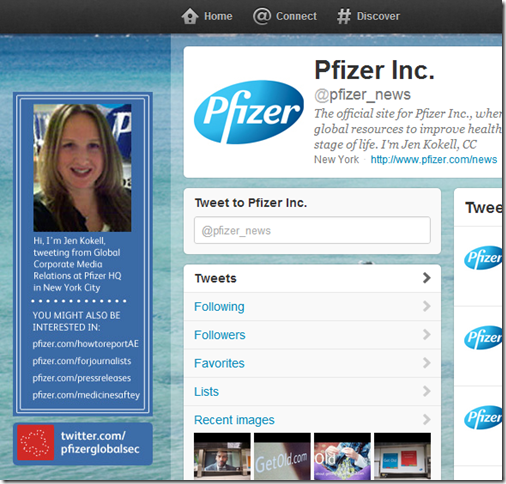 Disclaimer in the Bio Link

In June Morgan Stanley Smith Barney financial advisors got the go ahead to use Twitter. All 17,000 accounts have the same link in their bio pointing to MMSB’s legal disclaimer.

With this approach the disclaimer will be available from all Twitter clients. The downside is that you are losing a potential marketing opportunity – that link could instead be used to direct people to a Twitter-specific landing page.

Disclaimer in the Bio

For those wanting to make it clear that they are tweeting in a personal capacity, the classic “all opinions are my own” is often included in the Twitter bio.

No Disclaimer at All

Interestingly, the most common approach among the accounts we reviewed (even among B2B, legal and financial services companies) was to have no disclaimer at all. You’d think law firms would insist on disclaimers, right? But we checked the official Twitter accounts of the top 10 UK law firms and not one had a disclaimer on show. It seems that in the world of social media for lawyers, the accepted wisdom is that disclaimers don’t matter.

Perhaps the best advice we can give is, if you wouldn’t say it to your grandma, don’t say it on Twitter.

Do you have a Twitter disclaimer? Have you seen any examples of good disclaimers?