How #youdrive ratings and advertising 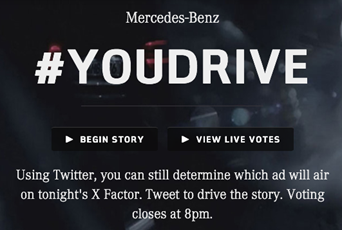 Shortly after spotting David Cameron’s first tweet on Saturday, I was intrigued to see #YOUDRIVE trending as a promoted hashtag. A few clicks later, I was being encouraged to “take part in a social media first”.

The Mercedes campaign featured three adverts to introduce the new A-Class to young professionals. The premise was a cat and mouse chase – UK rapper Kano was trying to get to a secret gig that the authorities were keen to close down, and viewers could vote via Twitter to steer the action real-time.

Viewers were given two opportunities to select outcomes during two ad breaks in Saturday’s The X Factor. The finale was shown during the Sunday night show – it recapped the first two episodes before the final reveal. 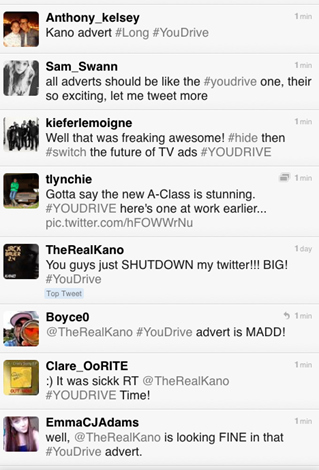 What particularly caught my eye were the tweets preferring the adverts over the programme that they were being aired in: “Only want to watch #youdrive advert tonight. Xfactor’s boring #switch”… “Hurry up, I just wanna see the adverts #youdrive”…

A year or two back, I rarely watched any entertainment programmes live. I would record and fast forward through the adverts. Now, some programmes just aren’t the same if I miss the live hashtag insights and conversations.

As with email, then mobile phones, Twitter is increasingly just one more way for us to talk. The popularity of hashtags such as #bbcqt (BBC Question Time), #scd (Strictly Come Dancing) and #xfactor make it clear that social media has already changed our viewing habits. How much will social media and campaigns such as #youdrive change how advertising evolves?