LinkedIn’s most viewed profiles for 2012 – spam or smart? 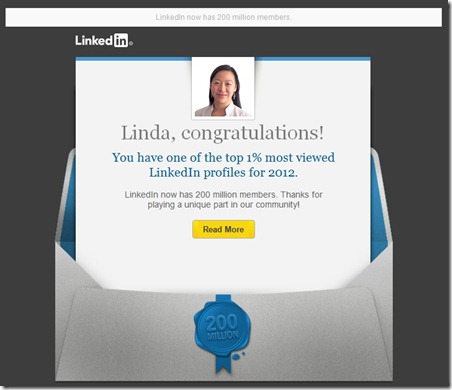 Last Friday I received this congratulatory email from LinkedIn. I was initially flattered to be in the top percentile, then focused in on the reason behind the mailing – LinkedIn had “reached a new milestone: 200 million members”. Having done the maths, I shared a screenshot on Twitter and Facebook with the comment “Email from LinkedIn… Should I be flattered, or frightened?” The response was immediate and wide-ranging – a wonderful mixture of sincerity, skepticism and sarcasm!

It seems that there have been emails for 1%, 5% and 10%. People have been questioning the validity of the percentages attributed, and how special being one of 2 to 20 million really is. Spam? Or smart marketing? 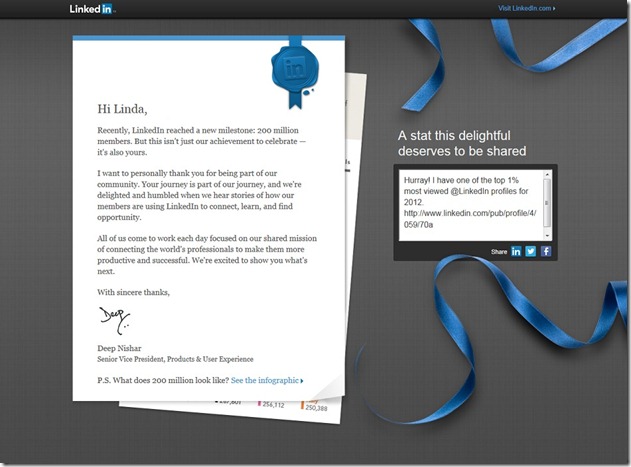 and even when the congratulations haven’t been received in a sincere way, they have generated social media shares, competition and conversation

Of course LinkedIn has a feature, only available to Premium accounts, which enables those paid members to see who has recently viewed their profile. Members with Basic accounts are frequently sends teasers to “Upgrade… to see the full list”.

By congratulating the most viewed, this campaign has generated reaction (be it pride, envy, or cynicism) and discussion about what it means to be in those top percentiles… highlighting the paid-for feature, and potentially increasing curiosity and conversions. I wonder if LinkedIn will reveal how successful this campaign ends up being in terms of upgrades. 20 million emails could suggest spam, but I’m going with smart.