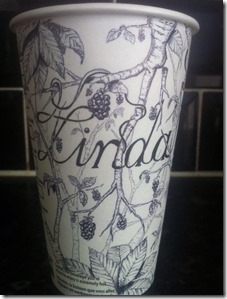 Ever since a random tweet led to CubeSocial’s first breakthrough, I have encouraged start-ups and professionals to embrace the serendipity of social media.

What do I mean by this? Having just translated the Russian headline “Работник лондонского Starbucks стал знаменитостью благодаря рисункам на стаканчиках” into English (London Starbucks employee becomes a celebrity thanks to cup drawings), let me explain by reference to Gabriel Nkweti Lafitte’s amazing #artcups…

A couple of weeks ago, a friend that I’ve been encouraging to tweet more often let me know that that she was back on the case: 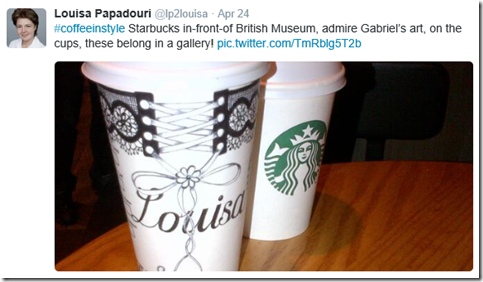 A couple of tweets later, I was being introduced to the artist:

… but did notice this older tweet on his timeline, which led to a conversation about how social media could help:

As we chatted I learned that Gabriel had “been doing this for years. Can’t help myself. I NEED to draw or write” and that his intricate cups could “take around 12 to 40 hours”…
I HAD to let others know: 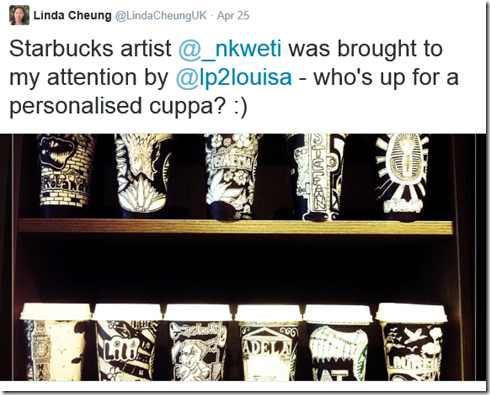 Seconds later, I received a number of replies in rapid succession, including:

Over the next couple of days, Richard widened the conversation to include Simon Redfern, Director of Communications at Starbucks (some tweets, mostly offline).

Less than two weeks after those first tweets, Gabriel’s first piece of press: 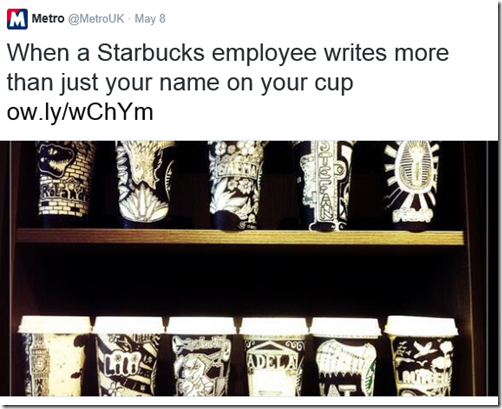 … which trended above Banksy on the day (and is currently at 3.4k shares): 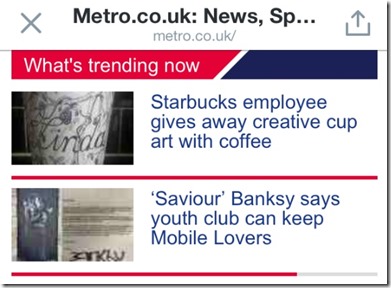 Gabriel’s #artcups have since caught the attention of BuzzFeed, the Ellen Degeneres Show, Epicurious, GizmoDiva, Starbucks Newsroom… the list just keeps on growing…

Of course, none of this would be possible without Gabriel’s talent – but it’s nonetheless amazing to think that all this coverage can be traced back to a single tweet!

#joiningthedots: you can tweet with Gabriel @_nkweti and via #artcup and #artcups. To see more of Gabriel’s work take a peek at his Facebook page
… and I’ve just received a tweet about his new website going live today

Now go, and embrace the serendipity of social media for yourself!

In the last few days, #artcups have appeared on the Huffington Post, in Canada, Malaysia, Peru, Mexico… French, Italian, Spanish, Dutch… but still no news about Gabriel’s work appearing on ceramics. If you would like see ceramic #artcups, please add your support below. If we can get all your comments in one place, hopefully powers that be will recognise and respond to the demand soon!