#joiningthedots has been central to CubeSocial, ever since a random tweet led to our first breakthrough: a 45 minute slot on BBC Radio to talk about our business – before we had determined what our business would be! People often ask us how that came about, and the answer is a random tweet.

A financial services journalist tweeted about passing though “grim” Basingstoke on a train and asked if there was anything good about it. I replied asking if she knew that I had moved there. If yes, how rude! That led to an email exchange which resulted in me being asked to write an article on ‘Why I left the City for a start-up in Basingstoke’. Two days after the article was published, the BBC phoned.

So I was delighted to learn of another #joiningthedots success story last night. Of course, I was notified by social media – first by Google+, then by a tweet, both from Paolo Fabrizio.

Paolo’s Google+ post was headed up “The power of online connections: from a tweet to a Forbes article” and included a screen shot of the tweets which resulted in an excited reply with a Forbes link: 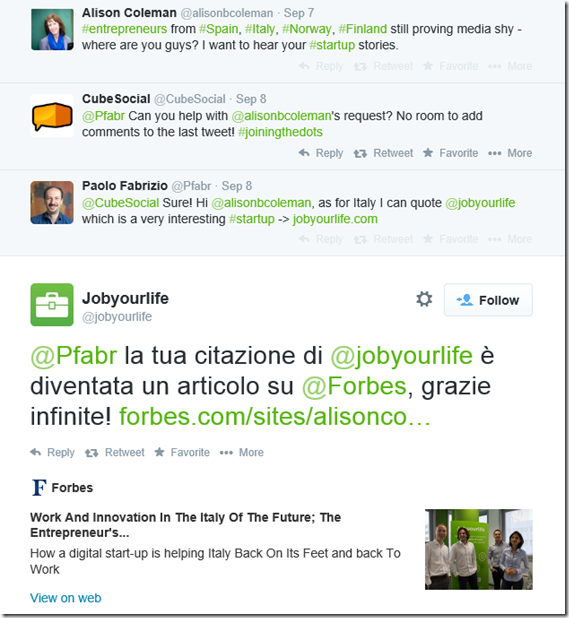 Without social media, this wouldn’t have happened.

It’s easy to make introductions at the virtual cocktail party on Twitter. #joiningthedots takes seconds, and it still amazes me what you can start with a tweet…

As Paolo says at the end of his Google+ post: “That’s the power of online networking”.