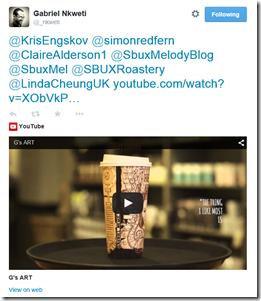 Regular readers will know how much I love the serendipity of social media, and that I have previously explained this phenomenon by referring to Gabriel Nkweti’s amazing #artcups – fearful that mine would suffer any damage, it now has its own artcup armour!

The campaign for Gabriel’s work to appear on ceramics continues, but it’s clear that Gabriel has Starbucks’ attention – earlier this month, an art installation of his work was featured at the Starbuck Reserve Roastery and Tasting Room in Seattle.

And nearly a year to the day since I was first introduced to Gabriel and his work, I was delighted to hear that Starbucks has made a video about G’s Art – of course I was notified by social media

Here’s the video. Of course, none of this would have happened without Gabriel’s talent – but it’s nonetheless incredible to think that all the coverage and recognition received can be traced back to a single tweet!